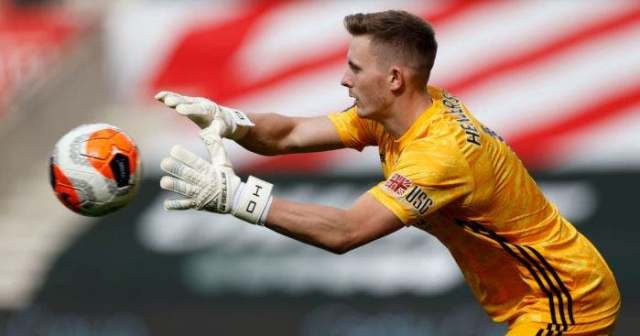 Dean Henderson is closing in on a new contract at Man Utd but his immediate future remains unclear, according to reports.

Henderson has put in a number of brilliant performances on loan at Sheffield United this season, which has led to rumours that Ole Gunnar Solskjaer could give him a chance as Man Utd number one next season.

The 23-year-old has enjoyed two very impressive seasons at Sheffield United, but does not want to return to Old Trafford and play second fiddle to current first-choice David De Gea.

The Spaniard has made a number of high-profile mistakes in recent times, leading to calls for Henderson to replace him in goal for United but another loan deal seems more likely.

And now The Sun claims that Henderson is ‘on the verge of signing a mega new four-year Old Trafford deal worth £100,000 a week’ with Man Utd concerned about interest from the likes of Chelsea.