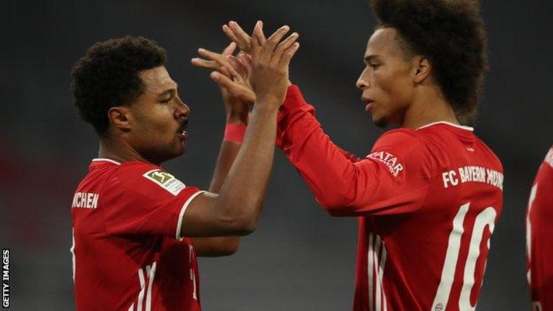 Leroy Sane said all-conquering Bayern Munich crave even more silverware after the Germany winger scored on his debut in Friday’s historic 8-0 thrashing of Schalke in the opening game of the new Bundesliga season.

“We’re still hungry, even though we won the treble last season,” said Sane after creating two goals for Serge Gnabry, who claimed a hat-trick in the goalfest at the Allianz Arena.

“Winning our first game at home 8-0 is obviously super.

“It felt really, really good finally to be able to play with the lads,” said Sane, who spent most of last season sidelined at former club Manchester City after tearing knee ligaments at the very start of last season.

“It’s been a very good day with lots of goals.”

Just 26 days after winning the Champions League final, Bayern picked up where they left off last season with their 22nd-straight win.