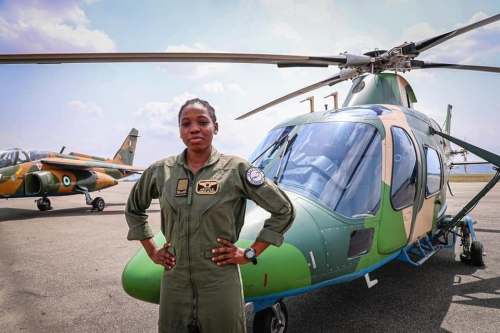 The Nigerian Air Force (NAF), on Wednesday in Abuja, immortalises some of its fallen heroes and officers including late Tolulope Arotile, for their contributions to the country.

The Director of Administration, NAF, AVM Aliyu Pani, says it is the tradition of the service to immortalise its fallen heroes by naming blocks of accommodations after them.

Pani made the statement at the inauguration of 10 blocks of accommodation for officers/airmen at NAF base Asokoro, constructed by the Ministry of Defence, as part of its 2018 Capital Projects.

According to the director, in line with the NAF’s tradition, all the blocks have been named after nine officers and one airman to immortalise them in recognition of their sacrifices.

“In this regard, at NAF Base, Bill Clinton Drive, one of the two blocks of 10 x 1 bedroom transit accommodation was named after Fg. Offr. AA Mohammed (NAF/5082) who was killed in action (KIA) on Sept. 5, in Birnin Gwari.