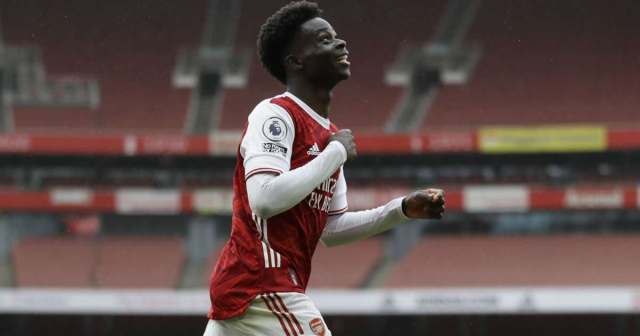 Bukayo Saka celebrated his first England call-up with a goal as Arsenal beat Sheffield United 2-1 in the Premier League on Sunday.

The Gunners failed to fire in a poor first half at Emirates Stadium, but two goals in the space of three minutes from Saka and substitute Nicolas Pepe secured their third top-flight win out of four in 2020-21.

Mikel Arteta’s decision to leave out in-form striker Alexandre Lacazette was in danger of backfiring before Saka and Pepe rocked the Blades, who might feel aggrieved David Luiz was not sent off early on.

David McGoldrick gave Chris Wilder’s side hope with their first Premier League goal of the season seven minutes from time, but Arsenal held on.

The Blades have lost all four Premier League matches and will need Rhian Brewster, who was not signed in time to play in north London, to hit the ground running after the international break.