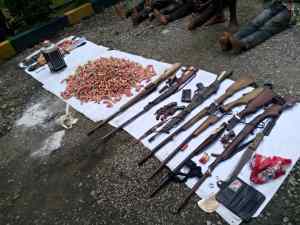 We have complied with IGP’s order on FSARS, SARS ― CP

The Cross River State Police Command on Friday paraded a gun running syndicate including a gunsmith who specialises in making automatic weapons for commercial distribution with network in Cameroon and other parts in the gulf of Guinea.

Vanguard learned that the syndicate sell guns to hunters, mercenaries and others for sundry crimes.

Addressing journalists at the State Headquarters of the Command, Diamond Hill, Commissioner of Police, Jimoh Abdulkadir said it was evident that due to the dynamic modern society has made a lot of citizens participation in crime fighting inevitable.

His words: “I want to thank the good people of Cross River, the media and other stakeholders for their uncommon and unflinching support and their resolve to readily collaborate with the police in tackling security challenges in the state.