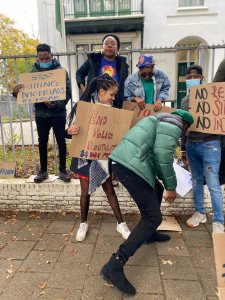 Members of a group known as Nigerians in Holland have also joined the #EndSARS protest with a peaceful protest to the Embassy of Nigeria on Saturday.

Led by Natasha Anochie and Whitney Usoh, the group with placards, marched to the Embassy demanding for the release of protesters, security of protesters during the protest, compensation of families of fallen heroes of Special Anti-Robbery Squad (SARS) brutality among other things.

Received by a minister at the embassy, Mr Kabiru Musa, the group sent a short letter to President Muhammadu Buhari titled: REQUEST FOR AN ACCOUNTABLE NIGERIA AND THE RESPECT OF THE HUMAN RIGHTS IN NIGERIA.

Concerning the above topic, we Nigerians in Diaspora, specifically in the Netherlands, have come together to join the peaceful protest…