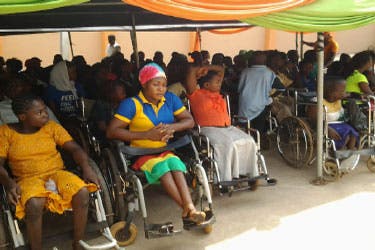 A foremost Rotarian in Delta State, Mr Joe Erharhaghen has called on Nigerians to be kind and compassionate to the physically challenged in persons the society.

Erhrarhaghen made the call when he led the physically challenged in Kokori community, Ethiope East Local Government Area of the state to a thanksgiving service, noting that there was no limit to what people with disabilities could achieve if given the needed love and support.

The Rotarian who also organised a lecture/reception for the people said he was inspired by his Rotary dictates and the teachings of Christ to always care for the less privilege in the society, adding that no matter how much wealth a man possesses if he fails to help those in need his wealth was worthless.

He said: “the physically challenged need our help very well. I had a friend who asked me if I have been to the north, and I said yes, he said you see those physically…