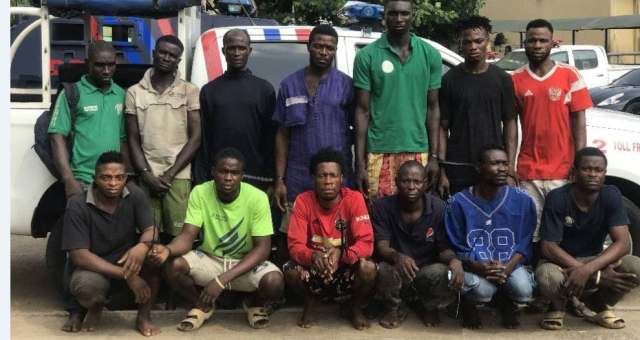 Thirteen suspected traffic robbers who specialize in attacking motorists trapped in traffic in different parts of Lagos were yesterday, arrested by operatives of the Rapid Response Squad , RRS.

Some of them were arrested in their hideouts around Motorways, Old Toll Gate and Olusosun Dumpsite , in the Ojota area of the state, while smoking Indian hemp, in preparation of an operation.

The Commander RRS, CSP Yinka Egbeyemi, disclosed the arrest while briefing the Commissioner of Police, CP Hakeem Odumosu during a meeting with policemen attached to the Squad and other operational units, organized by Odumosu.

Egbeyemi stated that some victims who were dispossessed of valuables and residents of the areas identified the suspects as those terrorizing motorists along the route.