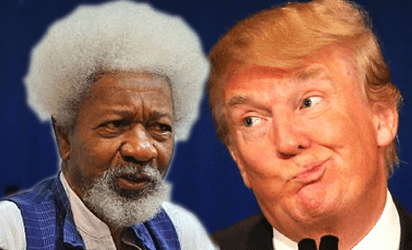 Nobel Laureate, Prof Wole Soyinka has said that he was not interested in applying for restoration of his America Green Card any time soon despite the exit of Donald Trump as President of the United States of America.

Recall that Mr. Donald Trump who was sworn in as President of the United States on 20 January 2017 left office on Wednesday, 20 January 2021.

Soyinka was among those who read the handwriting on the wall and warned US voters not to vote Trump in as President but was ignored.

He also threatened to tear his American Green Card if Trump won the election. He won. In fact, on November 2 2016, six days before the US election, Soyinka, as UK Guardian put it, told a student audience at Oxford University’s Ertegun House that he would hold his own, self-described “Wolexit” if Trump won, and destroy his green card.

“If in the unlikely…