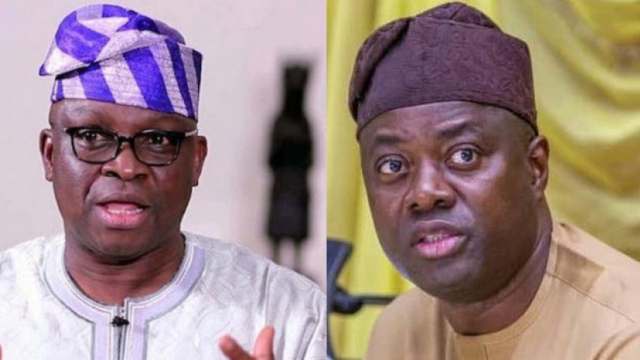 .., Says Oyinlola lacks moral preserve to be a peacemaker

The People’s Democratic Party (PDP) in the South-West has said a former Governor of Osun State, Prince Olagunsoye Oyinlola, has no moral preserve to be a peacemaker on the political feud between former governor of Ekiti State, Ayodele Fayose and the Oyo State Governor, Seyi Makinde.

The party’s Zonal Director of Media and Publicity, Lere Olayinka, who reacted to the report published by The Nation newspaper today, said “concerning the South-West People’s Democratic Party (PDP), Prince Oyinlola himself knows that he lacks moral preserve to be a peacemaker.”

The statement read; “Our attention has been drawn to a publication in The Nation newspaper that there will be a reconciliation meeting between Fayose and Governor Makinde at the instance of former Governor of Osun State, Prince Olagunsoye Oyinlola, today (Friday).

“To us, Prince Oyinlola is supposed to be Governor Seyi Makinde’s leader, but the reverse is…