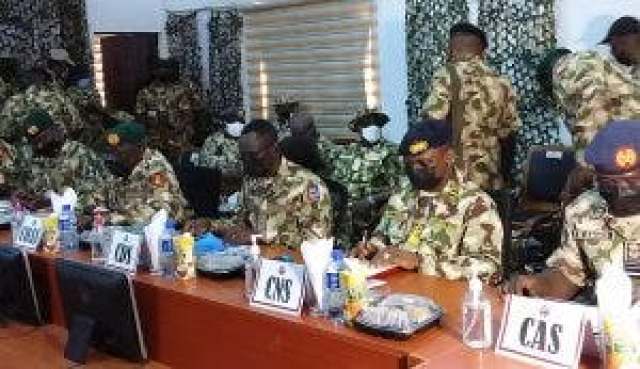 As the military intensified the fight against insurgency in Borno, the Chief of Defence Staff, Gen. Lucky Irabor, and Service Chiefs have arrived in Maiduguri, for the second time in one month to assess the situation on the ground.

Addressing troops, on Saturday, at the headquarters of “Operation Lafiya Dole” in Maiduguri, Irabor lauded them for the successes recorded.

He also commended them for their commitment and resilience, adding that there was a mandate given by the President and Commander in Chief that must be accomplished.

“What I need to let you know is that we have a mandate from him (president) and that mandate must be achieved.

“So, this is the reason why we are working assiduously. All issues of violence and insecurity, especially within the area of Operation Lafiya Dole, must come to an end,” Irabor said.

Earlier, the Theatre Commander of Operation Lafiya Dole, Maj. Gen. Farouq Yahaya had lauded the CDS and service chiefs for the visits, saying that it…

Police destroy N10 million worth of drugs in Lagos