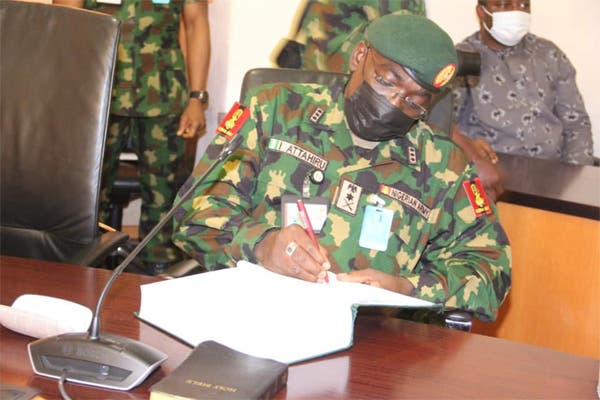 The Chief of Army Staff, Lt.-Gen. Ibrahim Attahiru, has charged officers and soldiers of the 6 Division Nigerian Army to be loyal and professional in the discharge of their constitutional roles.

The Director, Army Public Relations, Brig.-Gen. Mohammed Yerima, in a statement on Wednesday, said that Attahiru gave the charge during his maiden visit to the Division in Port Harcourt.

Attahiru urged the personnel to key into his vision, “A Nigerian Army that is repositioned to Professionally Defeat all Adversaries in a Joint Environment.”

He also urged the troops to be ready to accomplish all tasks in line with the norms and core values of the Nigerian army and continuous development.

The army chief further enjoined the commanders and subordinates not to engage in any form of illegal duties, saying that he would not tolerate such actions.

During a visit to the Land Component of Operation Delta Safe, Attahiru promised to reward outstanding soldiers, but punish those found…