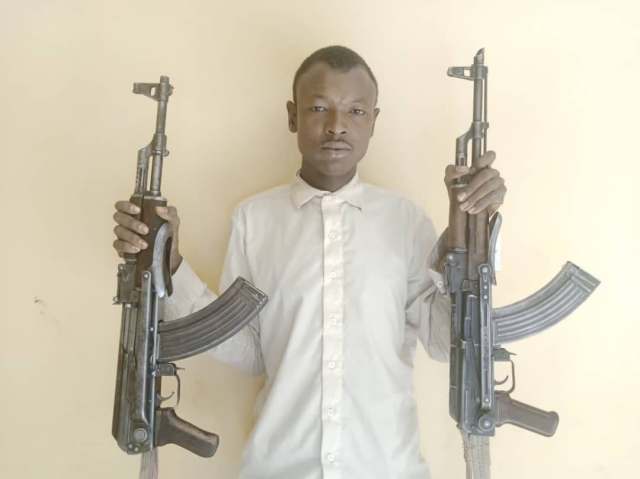 A suspected kidnapper and father of six children, one Abubakar Musa, 27-year-old, has confessed that he obtained guns to confront a bandit who snatched and married his wife after he was arrested and taken into custody.

Musa was arrested in possession of two AK47 riffles by the operatives of Police in Kano state.

The Police Spokesperson, DSP Abdullahi Haruna said the suspect, popularly called “Likita” along Birnin Gwari Axis was arrested based on tip off from members of the public.

DSP Haruna while parading the suspect said he operates in Birnin Gwari axis in Kaduna, Kano and other states in the North.

Upon interrogation, Musa a resident of Burumburum, Tudun Wada area of the state confessed to have partaken in series of operation of cattle rustling and kidnapping.

He said his first kidnap victim was his uncle which he carried out as a form of retaliation after his sister, Hafsat was kidnapped by his uncle’s son.

“I am a cattle rustler and…