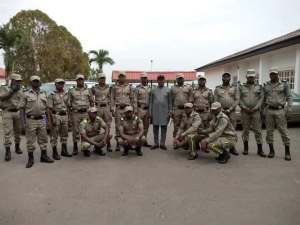 Following the recent announcement of the Southeast regional Vigilante group, Ebubeagu, the security outfit has made its first public outing in Ebonyi.

Recall the five governors of the Southeast region, on Sunday, April 11, launched Ebubeagu regional security to fight terrorism in the zone.

According to him, the regional security would be the joint Vigilante from Southeast with their headquarters in Enugu.

As seen through a video shown by the AIT on Wednesday, April 28, the group made up of about 6 young men was seen filing out in front of the government house, Ebonyi in their full uniforms.

While zooming in, an emblem of a tiger which is the totem of the group and which also represents, the name of the group – Ebubeagu is seen designed on…