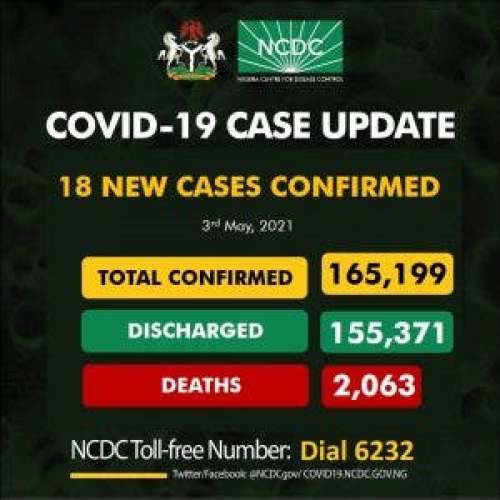 Nigeria Centre for Disease Control (NCDC) has recorded 18 new coronavirus infections, with zero COVID-19 related death in four states and the Federal Capital Territory (FCT) as of May 3.

The NCDC disclosed this on its official Twitter handle on Monday.

The agency said that with the new 18 cases, the tally of confirmed COVID-19 infections in the country jumped to 165,199.

It noted that Lagos State led with eight new cases, followed by the FCT with six cases, Edo; two cases, while Rivers and Ogun had one case each.

The agency said that the country’s active cases stood at 7,757 in the past 24 hours.

It stated that 10 people were successfully treated and had recovered from the virus and discharged from various isolation centres across the country in the past 24 hours.

The centre added that “our discharges today include two community recoveries in FCT, managed in line with standard guidelines.”