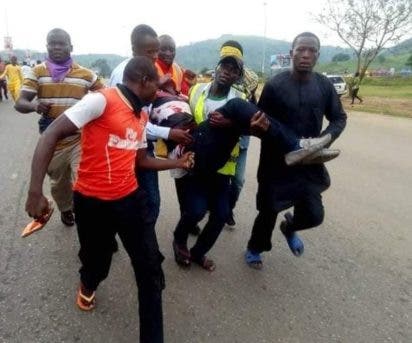 The FCT Police Command on Friday said it has successfully restored calm at Berger Round-About after professionally dispersing a violent protest by some members of the proscribed Islamic Movement of Nigeria (IMN)-Shiites.

A statement by ASP Yusuf Mariam, Spokesman for the Command said, “Unfortunately, the members of the disbanded sect went on a rampage destroying public property and attacking innocent citizens including Police Officers using dangerous weapons such as cutlasses, sharp knives, etc.

“Sadly, one of the Police Officer ASP Adama Ezekiel deployed to restore calm during the violent protest paid the supreme price as a result of the brutal attack where he was stabbed by one of the irate protesters.

“Forty-nine (49) members of the sect were arrested and will be arraigned in court upon conclusion of the investigation.

“In view of the above, the Commissioner of Police CP. Bala Ciroma wishes to commiserate…