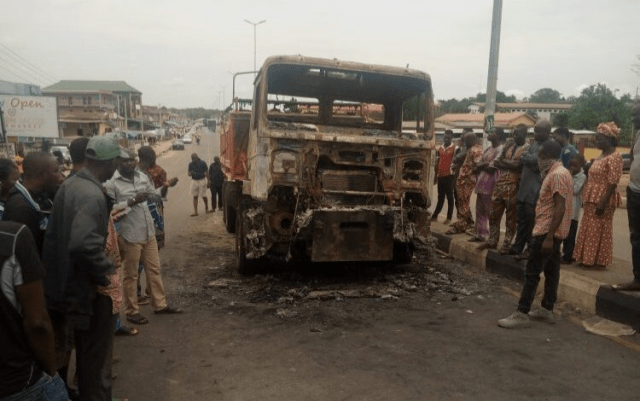 Tipper drivers in Ondo state have protested the setting ablaze of their vehicle by commercial motorcycle operators over the death of two persons.

Two persons were killed weekend when a  motorcyclist and a passenger rammed into a stationary truck along High Court area of Akure , the Ondo state capital.

Eyewitness account said that the motorcyclists and the passenger died on the spot.

These deaths angered the motorcyclists who mobilised their members and set the truck ablaze.

They were infuriated that the tipper driver did not put any caution sign on the road to indicate that it was a faulty tipper.

Consequently, the tipper drivers protested against the action of the motorcyclists by blocking the road in the metropolis.

Reports had it that the tipper drivers during their protest attacked motorcyclists plying the High court road in the state capital and a fight ensued.

Five motorcyclists were reportedly injured during the clash.