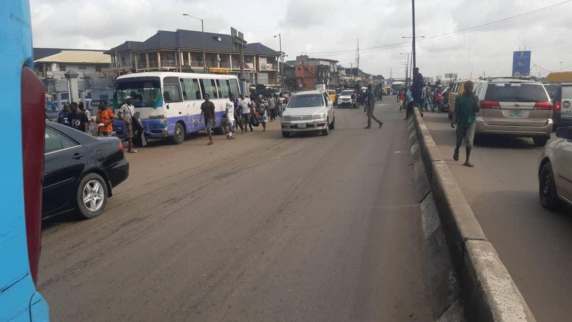 There was pandemonium in Capa Park Mosafejo area of Oshodi, Lagos State, on Thursday, after a group of Military men stormed the area to comb the hideouts over the murder of their colleague by some miscreants in the area.

The incident which occurred in the morning led to many residents, traders, and road users being stranded for fear of the unknown as the Military men took over the entire area while trying to fish out the miscreants.

It was gathered that some suspected hoodlums were picked in the process of combing the hideouts while some dangerous weapons were recovered.

Eye witnesses’ account said an officer of the Nigerian Air Force, was allegedly murdered by the hoodlums last Tuesday.

Vanguard gathered that the deceased who was on mufti allegedly ran into the hoodlums who were obtaining innocent victims at that time unfortunately they swooped on him.

However, this was resisted which led to his death under a tragic circumstance.