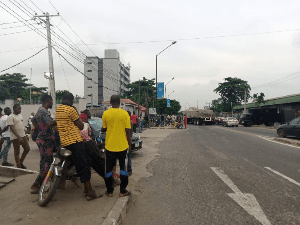 The All Progressives Congress [APC)’s primaries were truncated in many parts of Lagos on Saturday by hoodlums and party officials allegedly favouring particular candidates ahead of the July 24 local government elections.

The News Agency of Nigeria (NAN) reports that hundreds of aggrieved APC members on Saturday kept vigil at the party’s state secretariat in Lagos to ventilate their anger about alleged lack of fairness in the exercise.

NAN reports that armed security operatives had mounted heavy presence at the secretariat and barricaded access roads leading into the premises of the party secretariat.

In Badagry for instance, voting did not take place in all the 10 wards as there were disruptions and harassment over wrong voters register.

In Agege, wrong accreditation sheets were brought and the electorate could not find their numbers and names on the voters register.

“There was no primary election in Agege; actually people came out early in the morning to cast their votes…

El-Rufai warns against blocking of roads

With Buhari’s directive, Zulum moves to re-open farms along the Mulai-Dalwa axis