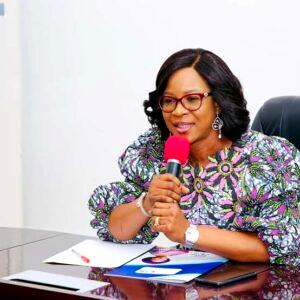 …says she is a pillar to her husband’s success story

SPEAKER of the Delta State House of Assembly, Chief Sheriff Oborevwori, Tuesday, described the wife of the State Governor, Dame Edith Okowa as a solid pillar behind the success story of her husband, Senator Ifeanyi Okowa.

Oborevwori in a statement by his Chief Press Secretary, Mr Dennis Otu to felicitate with the First Lady of the State, Dame Edith Okowa, noted that she has brought joy to many homes over the years in Delta through her 05 Initiative.

He said; “On  behalf of  my  family, Constituents, I want to congratulate Her  Excellency, Dame Edith Okowa, the wife of the Governor on her birthday today. We give God the praise for  her inspiring life. The Governor’s wife is a woman that has passion for her  05 initiative.

“With her drive, it is obvious that she is  determined to achieve greater success with the 05 Initiative. She has been able to establish sickle cell centres all…