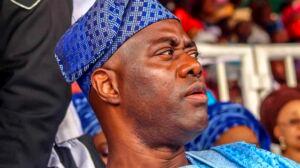 The All Progressives Congress (APC) in Oyo State has described Saturday’s killings in Igangan, Ibarapa North Local Government area, as one too many, and urged Gov. Seyi Makinde to promptly convoke a security summit.

This is contained in a statement signed by its Publicity Secretary, Dr AbdulAzeez Olatunde and made available to newsmen on Sunday in Ibadan.

The News Agency of Nigeria (NAN) reports that Igangan in Ibarapa area of Oyo State was on Saturday night invaded by unknown gunmen numbering about 50.

NAN reports that the dastardly act left no fewer than 11 people dead and several properties burnt including the Palace of the Asigangan .

The APC appealed to the governor to forget the rhetorics of having Àmotekun and Operation Burst, adding both had shown to be ineffective.

According to the party, it won’t stop in advising the governor to be proactive…