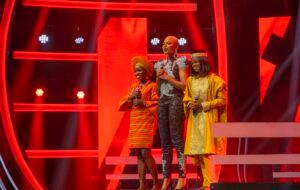 After a series of hard tackles at the Knockouts, qualified talents of The Voice Nigeria Season 3 moved on to the next stage of the show, the Battles where talents within the same team are paired to compete against each other to get a chance of getting to the Live shows. The first episode featured TeamFalz and TeamWaje.

Starting the battle round was TeamFalz. Dapo and Peace were the first pair to perform at the Knockouts, gracing the stage with their Coming to America-inspired costume and outstanding performance of Beyonce and Shatta Wale’s ‘Already’. Although all 4 coaches were impressed and had remarkable comments about their performance, their coach, Falz still had to make a decision about who will head to the Live shows. Ultimately, Falz chose Dapo bringing Peace to the end of her journey The Voice Nigeria.

Next to battle was TeamWaje as Elizabeth and Nuel Ayo go head to head to secure their spots on the live shows. With their sultry performance and undeniable…