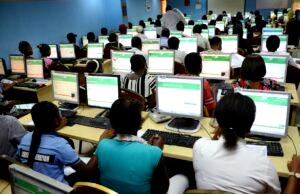 No fewer than 1.4 million candidates seeking admission into tertiary institutions in Nigeria on Saturday started writing this year’s Unified Tertiary Matriculation Examination, UTME, being conducted by the Joint Admissions and Matriculation Board, JAMB.

The number of candidates for this year’s exam was a significant drop from the previous year’s when about 2 million candidates sat for the exam.

While some blamed the drop on challenges encountered by some candidates in linking their National Identification Number, NIN, to their applications, JAMB still gave such candidates a two-week window to register at its offices nationwide.

At the end of the day, less than 50,000 candidates took that opportunity.

The Registrar, Prof. Isaq Oloyede, said the huge figures of the past could be attributable to double registration by some people or even registration by proxies that the NIN has helped to eliminate.

While the examination for early registrants…