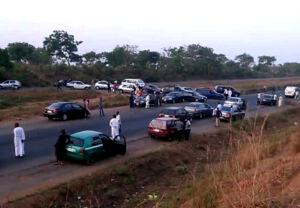 ‘Allow us protect ourselves against bandits’

The police in Kaduna state has deployed its operatives to restore order and allow travellers to move on the Kaduna-Abuja dual carriageway, following a protest by hundreds of locals, including half-naked women who blocked the road in anger against the alleged killing of a 13-year-old by bandits.

A couple of days ago,residents of Sabo Gaya ,one of the communities that suffered attacks near the NYSC camp along the highway, cried over the massive exodus from the area due to incessant attacks and abductions by the bandit.

A local has lamented over the absence of security ,alleging that bandits had gone from house to house and abducted a Yoruba trader with her children ,before they went away with a woman and her newly wed daughter.

” The bandits wanted to abduct the newly wed daughter but the women resisted ,insisting she was her only child and will not bear the brunt of losing her.So the bandits went with…