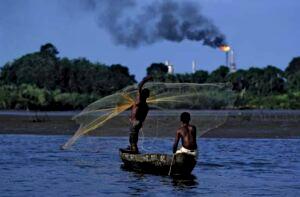 Indigenous fishing folks in Niger-Delta, weekend, lamented they could no longer ply their trade, following the colossal pollution of water bodies in the oil region by International Oil Companies, IOCs.

They also said that they have been rendered wretched by the IOCs currently detaching and gearing up to move offshore after destroying their means of livelihood, just as it has been revealed that the oil industry employing few thousands of Nigerians is seriously endangering the livelihood of over six million home-grown fishermen in the Niger-Delta.

The fishermen, who converged with environmental crusaders on the rustic settlement of Agbia, Gbarian clan, Yenagoa Local Government Area, Bayelsa State, for a one-day…