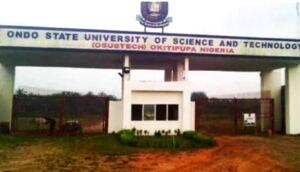 Hundreds of students of the Olusegun Agagu University of Science and Technology (OAUSTECH), Okitipupa, Ondo State have protested the alleged rape of four female students of the institution by gunmen.

In a swift reaction, the Management of institution has shutdown the school for two weeks over the security threats.

Vanguard gathered that the hoodlums also robbed the students of their valuables like phones, laptops, gadgets before raping the female students at gunpoint.

The university’s students had trooped out to register their displeasure over incessant robberies in their hostels, threats to their lives and properties and rape of the students by hoodlums.

During the peaceful protest, the students blocked the Okitipupa-Igbokoda highway thereby disrupting free-flow of traffic.