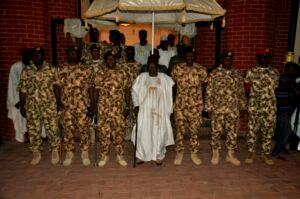 **As Army Chief visits Shehu of Borno, pledges to work with the traditional institution

Troops of 8 Division Nigerian Army (NA), while on a fighting patrol, came under fire from bandits operating along with Mayanchi-Dogo Karfe and Fagantama villages in Talata Marafa LGA of Zamfara State.

In the fierce encounter that ensued, the bandits were overwhelmed by the superior firepower of the troops.

This led to scores of bandits being neutralized. The troops also recovered one PKT riffle, a large cache of ammunition, and a motorcycle.

Relatedly, troops have neutralized 5 bandits in another encounter at Bingi village, in Bungudu LGA of Zamfara.

During the gun duel, the bandits withdrew in disarray having sustained  severe gun shot  wounds.

The gallant troops recovered one AK 47 riffle, one Motorcycle and 3 mobile phones from the routed criminals.

While appreciating the combat resilience and renewed vigour of the troops, the Chief…