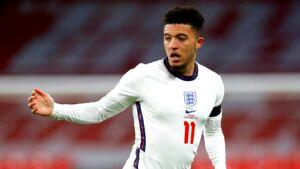 Jadon Sancho is poised to complete a long-mooted move to Manchester United after the Premier League giants agreed a fee with Borussia Dortmund for the England winger.

Stats Perform understands United will pay the Bundesliga club £72.9m (€85m) for Sancho, with no add-ons included within the deal.

It will make the 21-year-old the fourth most expensive signing in United’s history behind Paul Pogba, Harry Maguire and Romelu Lukaku.

Sancho is currently on duty with England at Euro 2020, a factor that is likely to delay the transfer being finalised.

But United manager Ole Gunnar Solskjaer will hope to have the former Manchester City youth team player among his attacking options for his team’s opening Premier League game against Leeds United at Old Trafford on August 14.

Since joining Dortmund in 2017, Sancho has scored 50 goals and provided 57 assists in 137 appearances across all competitions.