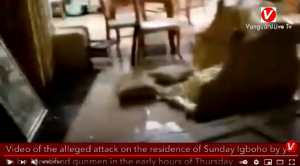 ‘We’re not in totalitarian regime’, dialogue the only solution — YCE

The residence of the Yoruba Freedom fighter, Chief Sunday Adeyemo Igboho was again attacked by people suspected to be security agents.

According to a close associate of Sunday Igboho, five people were said to have been killed and others seriously injured while the sporadic shooting lasted.

But, they could not get Igboho who was said to have disappeared. An unconfirmed source said the attackers who were dressed in military camouflage were over 50.

The latest attack on Igboho’s residence would be the third time that such attack would take place.

In a viral video, a lady was calling for help before the hoodlums gained entry into the palatial residence at Soka area of Ibadan.

Vanguard further gathered that after ransacking the whole house and were leaving, the attackers received a phone call telling…