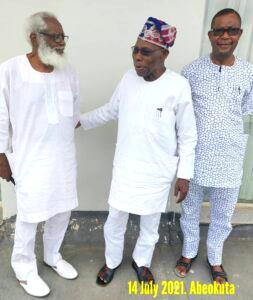 The former President, Chief Olusegun Obasanjo has met privately with national leaders of the Social Democratic Party, SDP on the state of the nation.

Vanguard reliably gathered that the meeting was held today ( Wednesday) at the Olusegun Obasanjo Presidential Library, OOPL in Abeokuta behind closed doors.

The National Chairman of the Party Dr Olu Agunloye and Ambassador Yemi Faroumbi led other top party chieftains to the meeting which lasted for over two hours.

Attempts to find out exactly what the trio discussed met brick wall.

But vanguard gathered that their discussions centred on the state of the nation and the way forward.

Contacted, Dr Olu Agunloye confirmed the meeting of top leaders of the…