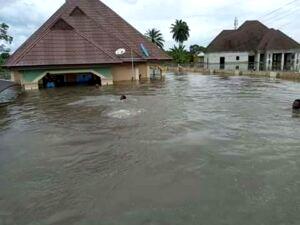 The National Emergency Management Agency (NEMA), on Thursday, distributed relief materials including food items to 4,000 victims of the recent flood disaster in Jalingo, the Taraba capital.

The Jalingo flood affected over 500 households and destroyed several farms.

Alhaji Habib Mustapha, Director General of the agency, while distributing the items to victims of the disaster in Jalingo, said that the gesture was to cushion the effect of the disaster on the victims.

READ ALSO: Flood sweeps away chairman of Okada riders, another motorcyclist in Ondo

He said more relief materials would be provided to the victims after an assessment of the disaster was conducted.

He said that the agency in response to the directive from the Minister of Humanitarian Affairs and Disaster Management, Hajia Sadiya Farouk was able to provide 21 relief items of both food…

2023: Those opposed to zoning of Presidency to south are enemies of Nigeria—Southern, Middle Belt leaders