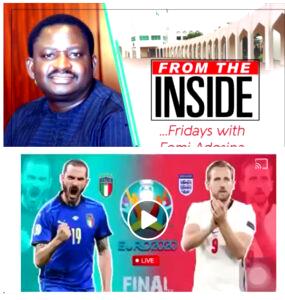 There he goes again. Troublemaker. He wants to abuse our prophets, the vessels of God Almighty.

Not so. Let me state from the beginning that I believe in prophecies and prophets. Good, sincere, genuine ones. “Believe in the Lord your God, so shall you be established. Believe His prophets, so shall you prosper,” says the Good Book in 2 Chronicles 20:20.

But when prophets play to the gallery, claim God has said, when God has said nothing, then they expose themselves to ridicule. From such, run away. Show clean pairs of heels.

On Sunday July 11, the final match of Euro 2020 was played between England and Italy at Wembley Stadium in London. The English team had a lot to play for. Since they last won the World Cup in 1966, also on home soil, they had won nothing again. Not even 5-a-Side Felele competition.

Getting to the final of Euro 2020 was thus big deal. Football was coming home, lovers of English soccer, home of the beautiful game, kept chanting. For those who…