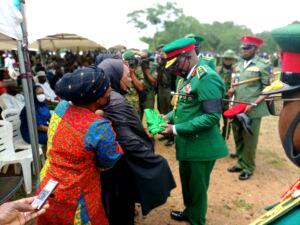 **We cannot Question God over his death – Army Chief

The Nigerian Army on Friday buried late Major General Hussaini Ahmed, former Provost Marshal, who was killed by gunmen, suspected to be bandits along the Lokoja -Abuja road on Thursday.

General Ahmed was buried with full military honours at a ceremony at the Guards Brigade cemetery after Islamic rites with the Chief of Defence Staff, General Lucky Irabor leading the Chief of Army Staff, Lt. Gen Farouk Yahaya and other senior officers from across the Defence and services headquarters to pay their last respects.

A 21 gun salute and a minute silence as well as the presentation of the National Flag to his wife, Mrs Talatu Abdusalam Adaji and Islamic prayers by Brigadier General Shehu Mustapha, Director Islamic Affairs, were part of the highlights of the burial ceremony.

In his remarks, Chief of Army Staff, Lt. Gen Yahaya described the late senior officer as an articulate,…