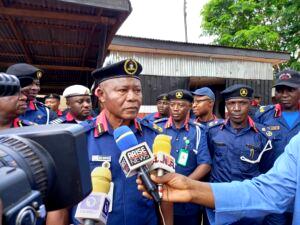 Determined to provide security to vulnerable schools in Kaduna State, the state Command of Nigeria Security & Civil Defence Corps (NSCDC ) has on Wednesday, launched a Rapid Response Squad (RSS) that will intensify surveillance and patrol for schools safety.

Speaking during the launch at the Command’s state headquarters on Wednesday.,
Commandant Godwin Miebi, State Commandant of NSCDC Kaduna Command said the development arose from their desire to provide the needed Security in schools considered to be vulnerable and to respond swiftly and effectively in times of distress.

He said, “this is a deliberate strategy to support the Safe School Initiative, introduced by our amiable Commandant General, Ahmed Abubakar Audi.”

“In doing this, our operatives have undertaken an assessment of schools in the state to ascertain the vulnerability of each, and strategies have been mapped out to ensure optimum results of our planned actions,” he said.