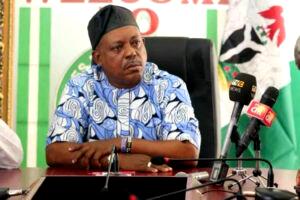 …Says, it didn’t force anyone to defect from PDP

The ruling All Progressives Congress APC has slammed northern governors within the opposition Peoples Democratic Party PDP for alleging that their former colleagues and National Assembly members who defected to the APC were intimidated and forced to join the party.

APC in a statement by the National Secretary of its Caretaker Extraordinary Convention Planning Committee CECPC, Sen. John James Akpanudoedehe accused the northern PDP governors of being stuck in the inertia caused by the clueless and dictatorial leadership of their tattered party under their National Chairman, Chief Uche Secondus.

APC said the allegation that she is forcing people into her fold is comical, laughable and devoid of truth, noting that “the PDP has conveniently forgotten it’s an ignominious and rejected pastime of muscling the opposition. We will remind them”.