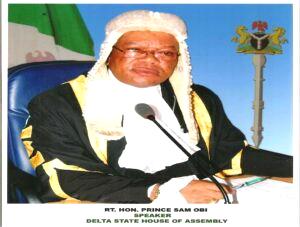 THE remains of erstwhile Acting Governor of Delta State, Prince Sam Obi, were yesterday, laid to rest at his country home in Ute-Okpu, Ika North East Local Government Area of the State amidst tears, wailing and eulogies.

The ceremony was attended by Governor Ifeanyi Okowa, his wife, Edith, his Deputy, Mr Kingsley Otuaro, Speaker of the State House of Assembly, Chief Sheriff Oborevwori, Deputy Speaker of the House, Chief Ochor Christopher Ochor, other sitting and non sitting members of the House, Commissioners and other top Government functionaries.

Speaking at the funeral of the late Prince Sam Obi, Governor Ifeanyi Okowa said Nigeria was still in crisis, charging citizens to have a recourse to God to help the nation.

Okowa said the growing challenges in the country had made it imperative for Nigerians to seek God wholly for solution, expressing deep sadness at the death of the former speaker of the state assembly.

He described the late…