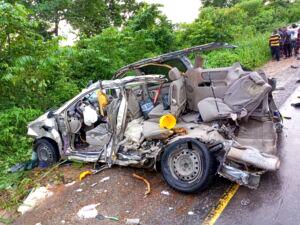 Fourteen persons, including six children were killed in an auto accident that occurred along Ilesa-Akure highway in Osun State.

The Sector Commander, Federal Road Safety Corps, FRSC, Mr Paul Okpe in a statement issued by the command spokesperson, Agnes Ogungbemi on Sunday disclosed that the accident occured at Power line area in Ipetu-Ijesa around 5:30pm on Saturday.

He said apart from the six children, four males and females were also killed in the accident while four others were injured.

“We received a distressed call at about 5:45 pm on Saturday evening about an accident on Ipetu-Ijesa – Ilesa Highway, involving two vehicles.

“Our men arrived at the location at 5:50 pm and met dead bodies at…