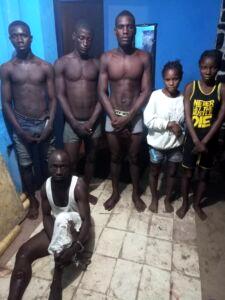 The Imo State Police Command has paraded six suspected kidnappers after bursting their camp in Tebegbe Water Side in Delta State and freed a victim, kidnapped from Imo, Cornelia Oluebube, Female, from Amakohia in Owerri North Local Government Area in the state.

The State Commissioner of Police, Abutu Yaro, during the parade of the suspects at the Command’s headquarters in Owerri, said it was based on technical intelligence gathering that the suspects were apprehended.