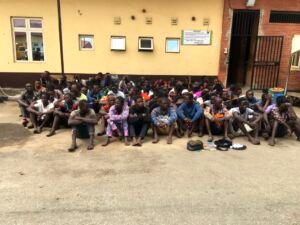 The Lagos State Police Command on 19th and 20th July 2021, arrested 103 suspects while raiding some black spots, at Oshodi Oke and Oshodi Under Bridge.

The suspects were arrested after Commissioner of Police,  Hakeem Odumosu, had ordered the Tactical Commanders and Commanders in charge of the Rapid Response Squad and Taskforce, to go after hoodlums and miscreants who may want to create security threats and attack unsuspecting Lagosians during and after the Eid-El Kabir celebration in Lagos State.

Sequel to the Commissioner’s of Police instruction, the Commander Taskforce and team embarked on the raid of the Oshodi area of Lagos State and arrested the suspects, recovered drugs and weeds suspected to be Indian hemp and dangerous weapons.