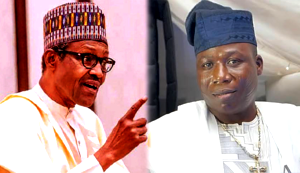 Igboho was declared wanted by the Department of the State Services, DSS, over alleged incitement.

Days after the declaration, DSS invaded his home in Ibadan, allegedly arrested 12 persons and killed two.

However, running for his dear life, Igboho was arrested by the International Criminal Police Organisation in Benin Republic on his way to Germany.

Yomi Alliyu (SAN), Igboho’s counsel had alleged that his client was facing inhuman treatment, as his legs and hands are allegedly tied like an animal in police custody.

The event took another dimension on Saturday, as Igboho through his lawyer Yomi Alliyu, sued FG over house invasion.

In the application obtained by TheCable, Yomi Alliyu averred: “The invasion and malicious…