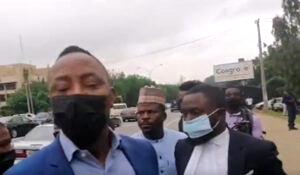 “Nnamdi Kanu told his members to attack military men, burn down police stations, and kill Igbos who do not buy to their ideology”, a yet to be identified man argued with Sowore.

A former presidential candidate, and founder of an online news agency ‘Sahara Reporters’, Omoyele Sowore, has been challenged by a yet to be identified man, who accused the leader of the Indigenous People of Biafra, Mazi kanu of fuelling discord in the country.

Sowore who came to witness the court proceedings was astonished when a man challenged him in an open debate over Nnamdi Kanu’s trial.

The man told Sowore that Kanu advised his members to burn down police stations. He equally argued that the ‘unknown gunmen’ threatening the peace of the South-East region were IPOB members who were asked to attack security officers.

In his response, Sowore asked the man to…

Electoral Act Controversy: Court orders Buhari, PDP to address it on May 24