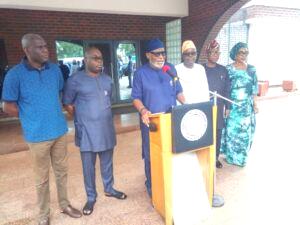 – My victory is an act of God

— Asks Jegede to join hands with him to move Ondo forward

Governor Rotimi Akeredolu of Ondo state has lauded the nation’s judiciary for standing by the truth and for not yielding to any influence in deciding the appeal filed at the Supreme Court by the Peoples Democratic Party governorship candidate in the 2020 election, Eyitayo Jegede SAN.

Akeredolu who described his victory at the Supreme court as an act of God said that ” l believe that we can still be proud of our judiciary in this country”.

In a Majority Judgment, the Apex court held that it is not in dispute that governor Buni is the acting chairman of the party in breach of section 183 of the constitution.

The appeal was based on the…