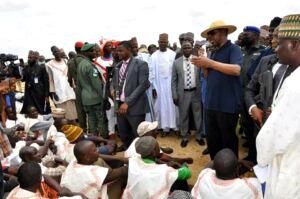 Zulum said, “although Armed forces and other security agencies including men of the Civilian Joint Task Force have been doing very well in the fight against insurgents, it is also important to engage local hunter groups who were more conversant with the terrain in order to speed up and end the lingering crisis.

“As a government, we shall not relent in our sustained efforts to ensure that insurgents are decimated and have no breathing space in our land.

“We shall provide immediate support economically to all…