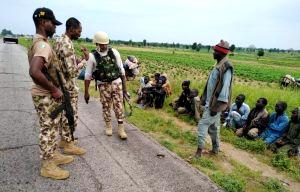 Troops of 202 Battalion have taken custody of eight Boko Haram Insurgents and their families, comprising 10 adult females and 22 children, who surrendered to troops at Ruwaza village in Bama Local Government Area of Borno state.

Director of Army Public Relations, Brigadier Gen Onyema Nwachukwu made this known on Friday night just as he said troops of forwarding Operational Base (FOB) operating along Bocobs- Bama road have arrested another 20 Boko Haram fighters and their families, who surrendered to troops at Nbewa village, also in Bama Local Government Area of Borno state.

He said, “The surrendering families of the insurgents comprised 15 adult females and 26 children.