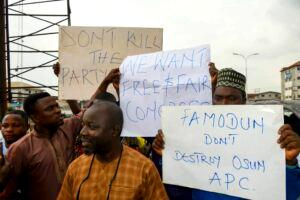 Some youths who are members of the All Progressives Congress (APC) in Osun State have accused Governor Adegboyega Oyetola and Caretaker Chairman of the APC, Prince Gboyega Famodun of committing electoral fraud ahead of tomorrow’s ward congress of the party.

The youths who staged a protest on the Gbongan-Ibadan road, Ogo-Oluwa, Osogbo, today alleged Oyetola and Famodun of hijacking the nomination forms brought by some national officials of the APC.

According to the group, the national officials who came to Osogbo last week Saturday were camped at a hotel under security surveillance and were barred from relating with any other members of the party in the state.

The youths who came under the aegis of Progressive Youth Movement called on the Governor Mai Mala Buni-led Caretaker/Extraordinary Convention Planning Committee (CECPC) to intervene in the matter and ensure that there is free and fair ward congress in the state.

Speaking at the Secretariat, one of the…