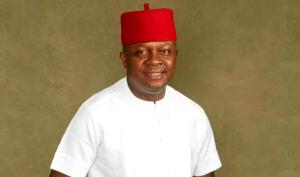 Mr Valentine Ozigbo, candidate of the Peoples Democratic Party (PDP) in the Nov. 6 Anambra governorship election, says he selected Mrs Azuka Enemo, as his running mate, based of her integrity.

Ozigbo said this when he spoke with newsmen on Tuesday in Awka, saying that Enemo was not imposed on him contrary to insinuations in some quarters.

“I decided to run along with Mrs Azuka Enemo because of her huge integrity and large support base, nobody imposed her on me.

Ozigbo, also the immediate past president of Transcorp Nigeria PLC, said he chose Enemo based on her experience, as well as her religious background as a devoted Anglican.

“The fact that I ran an election primary for two years in the state should have given me an idea of who my deputy would be, though I didn’t decide on that even after the primaries.

“I am not one of the people who go to politicians to make empty promises, I engage the leadership of Anglican Communion to get my…