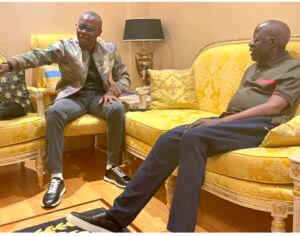 Lagos State Governor, Babajide Sanwo-Olu is currently in a meeting with the National Leader of the All Progressive Congress, APC, Asiwaju Bola Tinubu in London

Details of the meeting has not been revealed to reporters yet but it not unconnected to stories making rounds on the health status of the APC National Leader, Asiwaju Bola Tinubu.

Reports have it that the meeting is holding currently in London.

But there had been news making the rounds that Asiwaju Bola Tinubu was ill last week, a development which prompted his media aide to swiftly debunked the mendacious story.