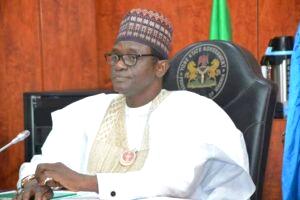 Governors of the ruling All Progressives Congress APC have formally thrown their support for their counterpart in Yobe and National Chairman of the APC Caretaker Extraordinary Convention Planning Committee, Hon. Mai Mala Buni with regards to his appointment into such capacity by the National Executive Committee NEC of the party.

The governors made their position known in a statement issued Thursday in Abuja and signed by their chairman, Gov. Abubakar Atiku Bagudu of Kebbi state.

Vanguard learned that the governors arrived at the decision to support Buni after series of consultations among themselves and other stakeholders.

On July 28 2021, the Supreme Court had pronounced its split decision on the appeal and counter appeals before it in the judgment of Ondo Gubernatorial Election petition.

Prior to the release of the written judgment, the governors said a lot of analysis and interpretations had been made, with some clearly mischievous.