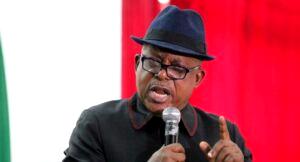 ...As BoT counsels party to learn from history

National chairman of the Peoples Democratic Party, PDP, Prince Uche Secondus, Thursday, counselled party organs to resist the temptation to do away with the current leadership of the party, noting that doing so portends ills for the party.

Secondus has had a week to forget, following persistent calls for his removal from several quarters, including some members of the National Working Committee, NWC.

Addressing members of the Board of Trustees, BoT, of the party at the Wadata Plaza national secretariat of the PDP yesterday, Secondus acknowledged that those picking holes with his management style are entitled to do so but pleaded that misunderstandings should be resolved internally.

He said: “Anything contrary to the…