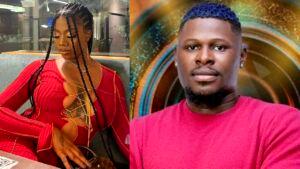 BBNAIJA season 6 housemate, Niyi has revealed how one of the female housemates, Angel made sexual advances to him while bathing in the shower.

The shower is known to be one of the places where housemates engage in series of romances basically because camera activities in there are very exclusive.

Niyi, at his dairy session on Friday, was asked by Big Brother if his marital status is affecting his game.

According to Niyi, it is not.

He said, “many a time the housemates see me as a relationship adviser but I have made them understand that I am here to play the game; I am a gamer.”

“Though, some female housemates put me in uncomfortable situations to test if I am strong and committed enough but I have proven to be,” he said.